Gen Y – how you stock your fridge can be important to your career! 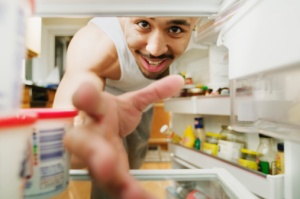 In the absence of her manager, I was recently asked to sit in on some graduate entry-level interviews to support and mentor, Tanya, a new addition to the Talent Management team of an international company. As we mapped out the structure of our individual roles, Tanya’s proposed line of questioning took me by surprise!

Who stocks the fridge?
While I was assigned to cover the traditional HR areas, transferable skills, communication ability, future goals, leadership potential and so on, Tanya’s line of questioning came from a totally different angle. She intended to throw in to the interview pot questions on where/how candidates bought their groceries, where they lived and what they ate and cooked.

I must have looked faintly mystified. That is important because…? She clarified: “Some entry-level candidates are babied by their parents. They order their kids groceries for them on-line with home delivery. They set up accounts in takeaways, shops and restaurants with the bills being sent to Mum and Dad. They arrange for cleaners or even come to clean their kids houses/rooms themselves.  Some candidates wouldn’t recognise an egg in its shell, let alone know how to cook one. They live off junk food. Some mothers freeze and label a month’s worth of dinners and put them their kid’s freezers!   One candidate told me how he had been told off by a delivery man for paying a £2.50 delivery charge on a £2.00 item, rather than go out in the rain. The more wealthy parents buy their children houses and apartments, so they can live in a nice area.  Even parents who are not well off get into debt.”

Exceptions
Aged 28, Tanya is a relatively recent graduate herself and as she gently reminded me, more in touch with what really goes on with her generation. Her own recent student experiences gives her an insight into the way some candidates have lived during their student days. She was quick to add: “Clearly not all are like that so it’s important to sort them out. This is just another way of identifying which ones are independent and can stand on their own 2 feet, or which ones are still firmly bound to their parents.  We need candidates who are self – sufficient practically and psychologically. It’s a skill to be able to balance all your domestic chores with your professional commitments and we don’t want candidates who can’t cope”

Helicopter parents
I am of course very familiar with helicopter parents in the recruitment process, so it shouldn’t have come as a surprise that if parents are involved in these procedures then they are also pro-active in their lives as students. But it did! All students are delighted to have the odd cake or pie from home (I was!) but their weekly groceries? I think I would have thought I had died and gone to heaven!

So although parents think they are supporting their offspring, this is just another way of depriving them of learning valuable life skills  (budgeting, time management, prioritising, healthy living, becoming a judicious consumer to name only a few) which can impact their careers if they are not in place. As the interviews unfolded a surprising number did come unstuck.

I think I learned as much from Tanya as she did from me.

This entry was posted in #Gen Y and tagged Helicopter parents, life skills. Bookmark the permalink.

6 responses to “Gen Y – how you stock your fridge can be important to your career!”